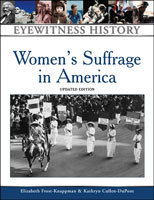 Reviews of the Second Edition:

"...bound to be a favorite of history and women's studies professors... well-edited and substantially updated... recommended..."
- AMERICAN REFERENCE BOOK ANNUAL

"...truly worth the expense...Those with the earlier edition should purchase the updated one, as it has significant changes that increase the value of an already excellent resource."
- FEMINIST COLLECTIONS

Reviews of the First Edition:

"One of the best recent books on the subject of women and the vote."
--THE WASHINGTON SPECTATOR


"In this election year, when an unprece- dented number of American women are running for national elective office, it seems a particularly opportune time to recount the historic fight for the woman's right to vote. And what better way to tell it than through the speeches and writings of those who lived it: Elizabeth Cady Stanton, Susan B. Anthony, Carrie Chapman Catt, and the other pioneers of the women's suffrage movement in America. Here, the women tell their own story through letters, diaries, novels, and newpaper articles. It's a lively and important sourcebook for students of American political and cultural history."
--SCHOOL LIBRARY JOURNAL


"A useful and interesting compendium of primary source materials...admirably edited and absorbing."
--CHOICE

When the Civil War began in the spring of 1861, Elizabeth Cady Stanton and Susan B. Anthony had to make a decision: How should members of the women's movement respond? Elizabeth Cady Stanton thought that their activities should be discontinued during the war. She viewed this as a tactical move. It was a detour--but also a chance for women to prove their worth as citizens. The war "to preserve the Union," would become, she thought, a war to end slavery. The women's rights activists, many of whom had strong abolitionist backgrounds, would involve themselves in the Union cause, and their contributions as citizens would make it clear that they were entitled to the vote. Cady Stanton was sure of this.

Susan B. Anthony disagreed. If women, for whatever reason, stopped pressing their claim, their claim would be ignored. Women would get the vote, Anthony believed, only if they continued to demand it. It would not be granted as a reward for patriotism, valor or sacrifice. Susan B. Anthony was equally sure of her position.

The efforts of women--on both sides of the war--began almost immediately....